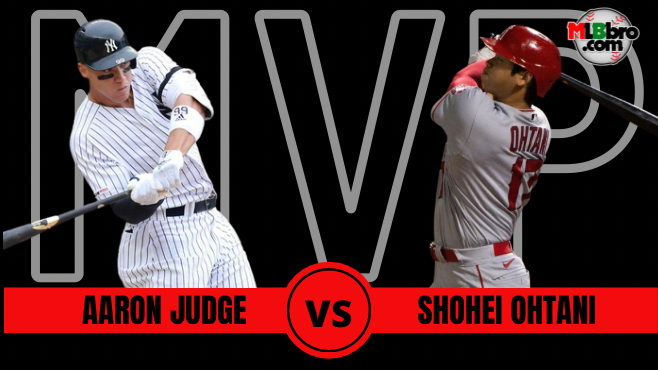 As the 2022 MLB season begins to head through its final quarter, the end-of-the-season awards are being discussed more and more.

One of the major awards, the AL MVP, has two players who each can make an argument on why the award should go to them. Those players are Aaron Judge and Shohei Ohtani.

Each player has three key reasons why they are deserving of the AL MVP.

2. He’s the best player on one of the best teams

One of the biggest edges he has over Ohtani is that the Yankees are a real threat to win it all. Plus, a majority of the wins are due to a big contribution from Judge. Whether it’s on social media or Sportscenter, there will be a highlight of Judge around once every other to every three games of him either hitting an absolute blast, or making a play on the by either flashing his leather or making a play with his arm.

3. He has been consistent throughout

Normally, any player who is hot and is on a record-setting pace for any stat eventually falls back down to earth. Judge’s home runs have been an exception. The most games he has gone without going yard this year has been seven games, and that was at the very beginning of the year, between his first and second one. With that being said, as every player tends to have a bad slump throughout the year, it really does not look like it’s going to be happening to Judge.

It does not matter what year it may be, but as long as he is healthy, Ohtani will always be in the MVP conversation due to his expendability. While pitchers are usually seen as automatic outs, not only is he not seen as that, but he is seen as a threat each and every time he walks up to the plate with his 25 home runs and 66 RBI. His averages are a bit down this year compared to his MVP season last year of .257/.372.592, as this season he is batting .256/.348/.499.

2. His pitching has been phenomenal

Ohtani has been an absolute force on the rubber. He has pitched better compared to his last season, as this year he only has a 2.66 ERA, which is exactly half a run better from the previous year. His record is not as impressive at 10-7, but a good chunk of that blame can go to his surrounding cast, as the entire team, from the front office to players, has been an absolute trainwreck. The team cannot get their act together for the eighth straight year.

3. He is keeping the team from completely sinking

While most people may see the Angels as being eliminated by being 10 games behind the last wild card spot, does not mean that’s exactly the case. It may be improbable, but it certainly is not impossible, as crazier things have happened. With Mike Trout having a career threatening injury, and Anthony Rendon being out for the year, if Ohtani somehow, someway can carry the team on his back and get past the biggest obstacle of his career, he is going to make it very tough for voters to simply give it to Judge, as completing this obstacle would be more impressive than any stat or record he may have achieved in 2021.