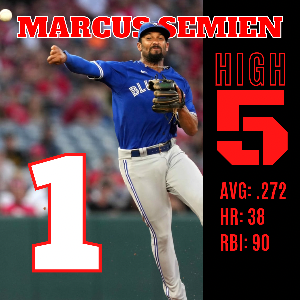 Marcus Semien is representing his fellow Virgos around world with how he opened the month of September.

He has six home runs including a walkoff and a grand slam and is closing in on the record for most by a second baseman in Major League history.

For that he takes the top spot on Week 22 of our #HighFive list.

Semien has 38 homers this season, which puts him 10th All-Time for most home runs by a second baseman in a season, tied with two Yankees; Alfonso Soriano and Gleyber Torres.

Semien’s hot streak has the Blue Jays on fire, entering Thursday they have won seven straight games, nine of their last 10 and are only a game and a half behind New York for the second wild card spot.

Semien and his Blue Jays will travel to Baltimore to take on fellow #High/Five member Cedric Mullins and his Orioles.

Jo Adell is becoming a fan favorite. The rookie  bounced back from a slow August and is owning September with the highest batting average for anyone on our #High/Five List.

From a Blake Snell no-hitter to a 2-0 lead for the Angels. Jo Adell delivers in the 7th pic.twitter.com/T4QYELnwxe

Adell batted .216 with only one home run in August, but through the first week of September, he already has three homers, a .391 batting average and eight RBI.

His biggest hit came on Tuesday in the top of the seventh inning against the Padres.

Blake Snell had a no hitter going with runners on second and third.

Adell shot a single into left field which scored both runners and broke a 0-0 tie in a 4-0 Angels win. 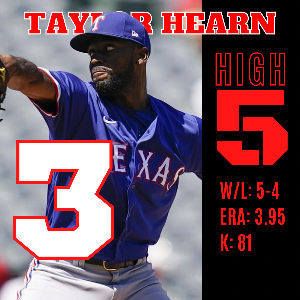 Taylor Hearn brings fire to the mound, whether he comes out of the bullpen, is an opener or gets to let it loose and go deep in games, like his most recent start.

Hearn has registered four consecutive quality starts, earning the victory in his last three. In each of his last two starts, Hearn has gone a career-high 6.2 and a full seven innings.

Hearn is getting his first taste of full time action this season and seems to be coming into a zone, improving each time he takes the bump.

Over his last three starts he has an ERA of 2.97, 16 strikeouts and only two walks.

His next start is scheduled for Sunday as he’ll take on fellow MLBbros Tony Kemp and Josh Harrison. 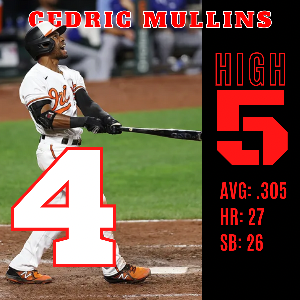 Even if you live under a rock you’re probably still aware that Cedric Mullins is raking. He has a chance to join the 30/30 club.

Even when he’s not circling the bases with one swing, Mullins is doing the job of a leadoff hitter and getting on base in any way possible.

Mullins has gotten on base in 15 consecutive games, not including his pinch hit appearance on August 30th and scored 15 times.

The Mariners 19-year long playoff drought is currently the longest in the Majors.

At some point this season, they were supposed to fall off, but led by last year’s Gold Glove shortstop J.P. Crawford, they have won 7 out of 10 games and are two and a half back of the final wild card spot.

Crawford put the Astros on ice with a two-run homer in the ninth inning Wednesday to save Seattle from getting swept.

Over his last seven games Crawford is hitting .323 with six RBI, four walks and eight runs. 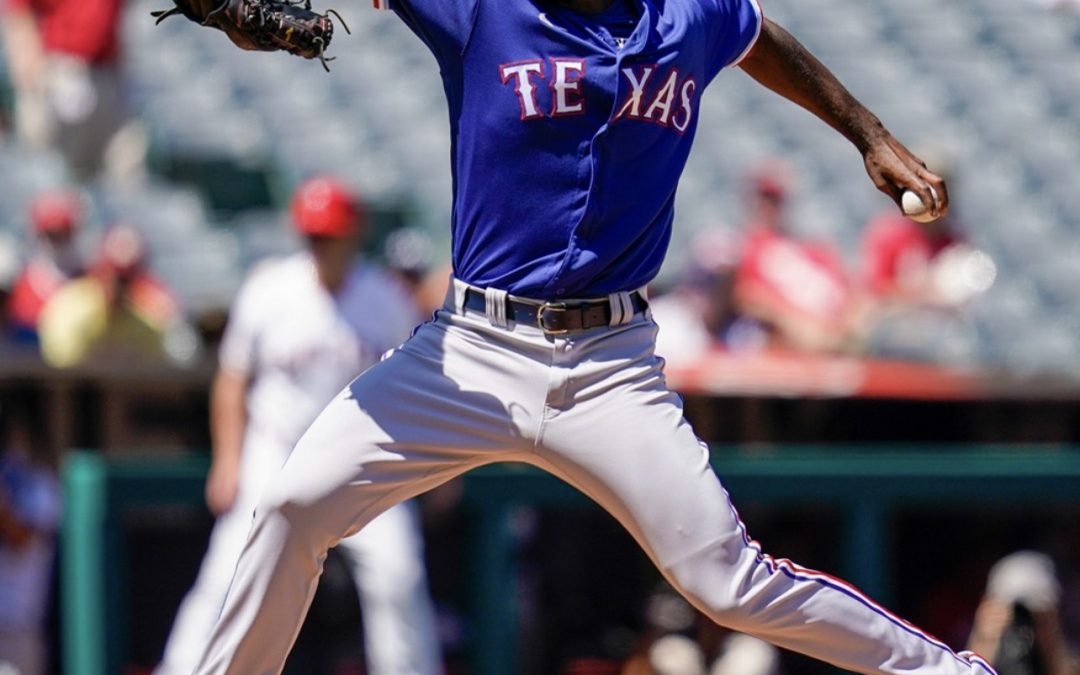 Texas Rangers pitcher Taylor Hearn is establishing himself as a formidable starter. He pitched seven strong innings on Sunday in a 7-3 Rangers win over the LA Angels. Hearn is proving that he’s capable of being a top of the rotation guy.

Malik Wright made a trip to Globe Life Field in Arlington to interview Swiss-Army knife pitcher Taylor Hearn. The third-year hurler has shown great versatility and maturity with his approach to pitching. 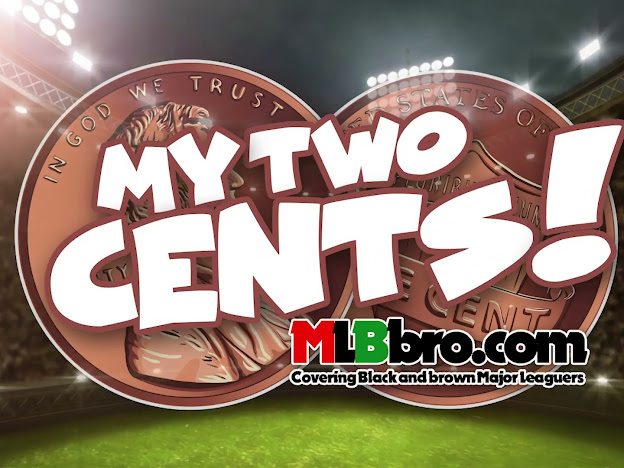 Taylor Hearn Is Mr. Versatility On The Mound

Rachel L. Hill has the 411 on Rangers pitcher Taylor Hearn, who’s earning his stripes after showing flashes of brilliance out of the pen and then proving that he can also eat innings as a rotation guy. 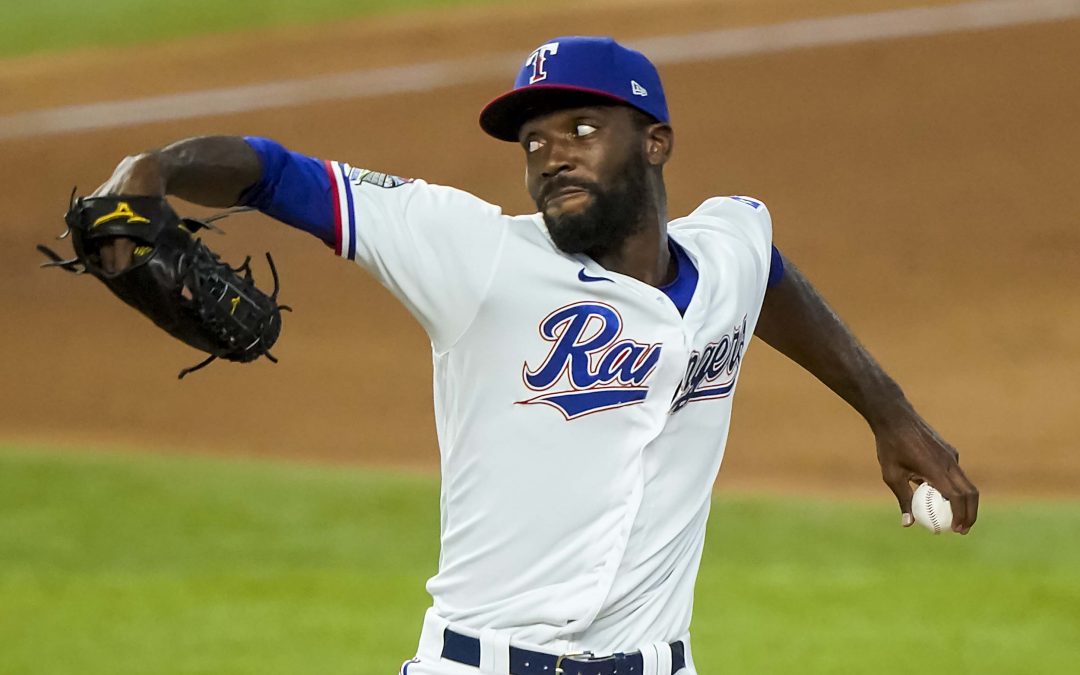 Taylor Hearn Continues To Push The Limits Of His Pitching Potential

Taylor Hearn is in his third season with the Texas Rangers and the left-handed pitcher has already made more appearances this season than the last two combined.

Hearn is starting to adjust in the league as a pitcher and he wants to help make an impact for the Rangers anyway he can.

Typically, Hearn is a bullpen guy, who comes in later in the game and pitches anywhere from one to two innings. At times he may be asked to go longer.

But recently, he did something for the first time this season, starting a game on the mound.

In his first start of the season, Hearn did not have the outing that he envisioned.

On June 22, 2021, he took the mound against the Oakland Athletics. It was a quick outing for Hearn as he only threw 0.2 innings. He gave up four runs on two hits and walked three.

Now Hearn had made 22 appearances before that, but they all were out of the bullpen. So he quickly had to make an adjustment in preparation for his first start of the year.

So you see, it was one of those nights for Hearn. But that’s the game and it happens. It’s all about how you bounce back from adversity.

Rangers manager Chris Woodward did not waste any time pulling Hearn out of the game.

“He just didn’t have good command,” Woodward told The Dallas Morning News. “He was all over the place.”

Going into the game, Woodward was not expecting Hearn to pitch more than a few innings or even solidify himself as a starter. Hearn only made one other start during his career and that came in 2019. It was his major league debut and he only recorded one out before he was pulled.

So for Hearn, it seems like coming out of the bullpen is more of his thing. But who knows, he may get another opportunity to start during the season and he might have a totally different outing.

Great showing on the mound for #MLBbro Reliever Taylor Hearn of the Texas Rangers as he struck out 7 in 3 innings giving up only 1 hit and 1 run #MLBbros #StraightUpTX pic.twitter.com/vMMHLqudrB

June has not been a good month for the 26-year-old on the mound as he finished the month with a 9.58 ERA in seven appearances.

But in May, the 26-year-old was an effective reliever out of the bullpen. He made eight appearances during the month and had one game where he allowed the opposing team to score.

He finished May with a 1.93 ERA through 14 innings of work and picked up two wins. Hearn has a 2-2 record through 23 games and an ERA of 5.75 with 42 strikeouts. He had the streets of Arlington buzzing.

Everyone has ups and down throughout the course of a grueling 162-game season. Our MLBbro will have many opportunities to make an impact on the mound.

Hearn can use his recent performance as motivation going forward. There’s no question that he has the skillset to be effective.