BUD FOWLER: The MLBbro Icon & 2022 Hall of Fame Inductee Was The First Black To Play In A Professional Baseball League

Everyone knows the legendary story of MLBbro and hero Jackie Robinson. He is known for being a pioneer for all MLBbros who have played in Major League baseball. A staple in African American and baseball history, Robinson was the first Black player to gain prominence in a white baseball league. Jackie Robinson officially broke the color barrier set by major league baseball in 1947, but it was Bud Fowler who, nearly 70 years prior, became the first Black man to play in an all-white professional baseball league.

Born John W. Jackson, he obtained the name “Bud” from his teammates due to the fact he routinely greeted others with “Hey, Bud”. Eventually he would don the name Bud Fowler. Fowler grew up learning and playing baseball in Cooperstown, New York, close to his hometown Fort Plain. In 1878 Fowler became the first Negro player to play in a professional baseball league, pitching in the International League.

As a teenager Bud played on several different professional teams, most notably being listed as a pitcher and catcher initially and as a second baseman in the latter part of his career due to arm troubles. Although his playing time was scarce at many of his destinations, he was renowned for his skill. His reputation as a skilled and multi-talented player provided him with numerous opportunities to play.

Supporting himself financially as a barber, he was able to make money while traveling which allowed him the fiscal responsibility to move wherever he needed to play the game he loved. Since there was no established rule against players of color being allowed to play, Bud was able to consistently get on rosters but finding suitable playing time was another issue. Due to racial tension, white teammates threatening to quit, and some blatant attempts to injure Fowler on the field he was forced to be a career journeyman.

It is estimated that Fowler played in over a dozen different leagues spanning two decades. Due to the landscape of professional baseball at the time, this caused him to play in roughly 20 different states across the United States.

Playing in the era of “barehanded” fielding, Fowler was known for great fielding. He played for several minor league teams due to an understood and unwritten “gentleman’s agreement” which did not allow black players in the sport.

After over twenty years of playing across the country he, and Grant “Home Run” Johnson, a Negro league player, helped create the Page Fence Giants. This was one of the first prominent all-Black professional baseball teams and was founded over twenty years before any official Negro League was even created.

The impact and story of Bud Fowler is not as well-known as that of Jackie Robinson, but he was every bit the pioneer that Jackie was. It was only natural that he would finally be enshrined in the Baseball Hall of Fame on July 24, 2022. Ironically, the Hall is located in Cooperstown, the same city where Fowler learned to play the game.

Major League Baseball has been intentional about incorporating notable Black players and Negro Leaguers into the Hall of Fame. Hopefully, with more rightful inductions like Fowler’s, the Black presence can be represented much more favorably in Baseball and get more appreciation than it currently does.

After 14 years of planning, the Jackie Robinson Museum opened Tuesday in Manhattan with a gala ceremony attended by the 100-year-old widow of the barrier-breaking ballplayer, Rachel Robinson, and two of his children. 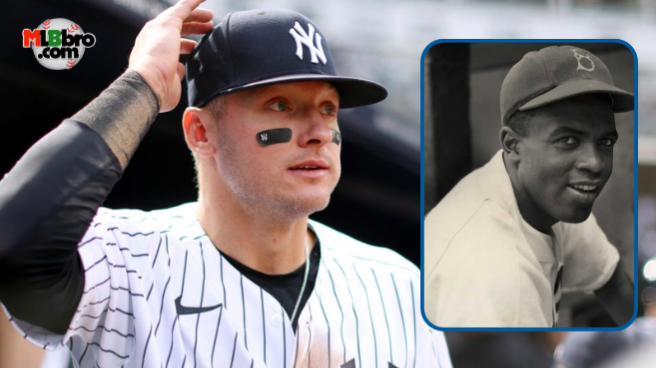 New York Yankees infielder Josh Donaldson formally apologized for his controversial remarks towards Chicago White Sox shortstop Tim Anderson that involved a reference to Jackie Robinson, which Donaldson deemed a joke, but nobody else in the MLB community found funny.

Donaldson, who received a one game suspension and an undisclosed fine from Major League Baseball that remains under appeal, also apologized to the Robinson family.

“I would also like to apologize to Mrs. Rachel Robinson and the Jackie Robinson family for any distress this incident may have caused. Jackie was a true American hero and I hold his name in the highest regard,” in his statement.

Donaldson appears to have recognized the insensitivity of his trash talk as a poor attempt at humor.  The Yankees third baseman also wrote that he and Anderson now have a “mutual understanding” about the context of his using Robinson while mocking him during on-field chatter that is routine among players, but apparently crossed the line, leading to a benches-clearing melee’ on May 21 at Yankee Stadium.

“First and foremost, I have the utmost respect for what Tim Anderson brings to the game of baseball,” Donaldson wrote. “I stated over the weekend that I apologized for offending Tim and that it was a misunderstanding based on multiple exchanges between us over the years. My view of that exchange hasn’t changed and I absolutely meant no disrespect. In the past, it had never been an issue and now that it is, we have a mutual understanding.”

In a 2019 Sports Illustrated article, Anderson referred to himself as the Jackie Robinson of this generation of Black American baseball players and stated that many of the things Robinson endured, Anderson and other Black ballplayers are still facing today.  He also said that he was trying to bring fun back to the game.

Anderson has proven to have the last laugh in big moments in nationally televised games against the Yankees.  His walk-off homerun in last season’s Field of Dreams game was the difference last July.  Last Sunday his three-run home run in the Bronx capped the doubleheader sweep as Yankee fans showered him with a chorus of “Jackie, Jackie, Jackie” as he rounded the bases.

Baseball’s historic underbelly of racism and prejudice reared its ugly head in the Bronx on Saturday.  That New York Yankees third baseman Josh Donaldson would mock shortstop Tim Anderson of the Chicago White Sox only personifies the stench beneath the surface of America’s national pastime.

Anderson was offended that Donaldson would refer to him as “Jackie” on the base path which is disrespectful to any Black baseball player in 2022. When he doubled down by claiming that he was referring to the White Sox shortstop’s reference to himself in a 2019 Sports Illustrated story, it was an arrogant condescension to a time that Major League Baseball has been trying to live down for the last 75 years. Donaldson also admitted on the record that he’s used it in the past when referring to Anderson and didn’t know what changed.

In true Jackie Robinson fashion, Anderson got his retribution using his immense talents. It was part of a five-run explosion in the 8th inning enroute to a 5-0 White Sox win over the New York Yankees and new team comedian Josh Donaldson.

With a 2–0 lead in the top of the eighth, Anderson stepped to the dish with Andrew Vaughn and Reese McGuire on base. TA smoked a Jonathan Loáisiga slider over the rightfield wall and had a message for Yankee Stadium.

While rounding the bases, Anderson put his finger to his lips and shushed the booing crowd. It was also a shoutout to the big guy upstairs who made all of this possible for Black and brown and Latin players — Jackie Roosevelt Robinson. The big hit is all the more special for the White Sox and Anderson, who have been at the center of controversy with the Yankees this past week.

Obviously, Donaldson hasn’t seen the George Floyd video. He just left a franchise that plays in a state that just won a World Series but treats an HBCU female lacrosse team like criminals during a traffic stop while suppressing its voters.

In the context of trash talk on a diamond during the politically correct counterculture society of today, Donaldson now finds himself at the top of the lineup of the game’s new form of racism.  Donaldson may not have recognized how his statement exemplified white privilege that still exists in baseball during a postgame interview on YES Network where players like Anderson are often left feeling isolated as the only Black American in a professional workspace.

It was both shocking and enlightening. Perhaps it was the smirk on his face when he says he’s not a racist but was only making a joke while in the sanctity of the Yankees clubhouse. That act may have worked in Atlanta, it won’t play well in New York.

Anderson had previously said he feels he is still facing some of the same cultural biases facing Black American baseball players that Robinson faced when he broke the color barrier in 1947. You have to wonder how his teammates Aaron Judge and Giancarlo Stanton feel about Donaldson’s in-game sense of humor, trash talk, or euphemism their new teammate freely spits like shells from sunflower seeds.

Donaldson is either socially tone death or culturally insensitive by using Robinson’s legacy as trash talk during a game and trying to brush it off on TV afterwards with a surfer dude grin.  When a player with Donaldson’s game is so cavalier about using this type of reckless reference and there are no consequences, MLB’s true commitment to diversity will take another beanball to its reputation.

This is not a good look for the game.  It was an unnecessary storyline during the national TV broadcast for a league that is still struggling to fill seats in the pandemic era. It should’ve been just about the Yankees meeting the White Sox with the best record in baseball. Suddenly, Anderson’s field of dreams walk off when the teams met last July, was a lost memory also.