After getting hit by a pitch on Monday during a game against the Cincinnati Reds, the Twins’ center fielder suffered what is known as a boxer’s fracture in his left pinky, and the recovery time will likely keep him out of the 2021 All-Star Game.

The injury comes just three days after Buxton returned from the injury list with a bang after recovering from a hip strain.

Earlier today @OfficialBuck103 hit his first home run since returning from the Injured List Saturday. He is on track to start in Center field for the American League All Star team next month. #MLBbros #MNTwins https://t.co/icd5rNo3ja

No one can deny that it’s tough to see a player miss significant time due to injury, but this news about Buxton is a harder pill to swallow for one very clear reason: he’s constantly on the injured list. It feels like he can’t catch a break. Matter of fact, to be exact, he’s been on the injured list 15 times since getting drafted. That’s a big number for anyone, but it hits a little differently when the player is as good as Buxton is.

As the second overall pick in the 2012 draft, Buxton has lived up to the hype when he’s healthy. Despite only playing in 27 games this season, his numbers reflect his talent.

The American League Player of the month for April is staying hot in May. #MLBBro Byron Buxton continues to rake as this Home run gave his Twins an early lead #MLBBros #MNTwins https://t.co/gQqKWOwSfR

So what’s next for Buxton? Unfortunately, there is no way to answer that as of now. According to Twins manager Rocco Baldelli, Buxton is “beyond upset about it.”  The Twins have yet to know if Buxton’s injury will require surgery, and they also don’t know how long it will be until he’s cleared to play again.

Unfortunately, questions about how long Buxton will recover from this injury also mean that Buxton’s availability for the upcoming All-Star Game is one giant question mark.

For Buxton, the timing couldn’t be any worse, especially considering that his injury occurred exactly one week after the standings for the first phase of voting results were made public.

The way the voting works is quite simple. The three position players with the most votes advance to the second phase, and the top nine outfielders in each league will advance as well.

Last Monday’s standings had Buxton listed as third amongst the top nine outfielders in the American League. The two players above him were Mike Trout, who had 15 percent of the votes, and Aaron Judge, who had eleven percent. Buxton earned eight percent of the votes. However, the first phase of voting doesn’t officially end until Sunday, June 27.

Byron Buxton remains in third among AL outfielders in All-Star voting, which would put him in line to advance to the next round of voting. pic.twitter.com/2494MVVZzA

With this injury now being the deciding factor on whether or not Buxton will be available, there is a strong possibility that he drops from his current spot on the list. Unlike Trout and Judge, this could have been his first year as an MLB All-Star.

Byron Buxton is set to begin his rehab stint in Triple-A St. Paul with the hopes of returning to the Big League club this weekend. Buxton has been seen running at 100 percent. If all goes well, he should return to the Twins’ lineup for their weekend series in Minnesota against Michael Brantley and the Houston Astros.

He will look to reclaim the starting job in centerfield for the American League All-Star team and put his name back in the conversation for Most Valuable Player.

Buxton came out the gate throwing harder haymakers than Ali to begin this season.  It seemed he had finally put all five tools together as he hit .370 with nine home runs, 17 RBI and five stolen bases in his first 24 games of the year.

In April, he was awarded the AL Player of the Month Award after batting .426 with a .466 On Base Percentage, eight home runs, 14 RBI, 15 Runs Scored and three steals.  He also set Twins’ franchise records for March and April in batting average, slugging percentage and OPS.

His defensive play in centerfield had him on his way to winning the first Gold Glove of his career. On May 6, Buxton hit a grounder to the shortstop in the late innings of what would end up being a loss to the Texas Rangers.

Buxton has always been a hustler as he has beaten out multiple routine plays throughout his career.

This time as Buxton crossed first base it was apparent something was wrong.  He did not return to the game and ended up having a Grade 2 right hip strain, which put him on the Injured List for the last 30 games.

His absence has truly shown how valuable Buxton truly is to Minnesota.  Buxton had a Wins Above Replacement rating of 2.7 before his injury, good for third in MLB.  Marcus Semien, who won the AL Player of the Month for May,  is tied with Vladimir Guerrero Jr. for first in the American League with a WAR of 3.1.

The Twins were sitting in first before Buxton went down and since then are 13-17 and have fallen into last place, 12 games behind the first-place White Sox in the AL Central.

Buxton is returning just in time to have his name in conversations to be at this year’s All-Star Game next month in Denver.  Fan voting determines the starting lineup for each division while the managers decide on the rest of the rosters.

I believe the fans will handle their business and vote Buxton as the centerfield starter despite him missing time with a few injuries this season.

The All-Star Game is a collection of the greatest talent in the sport, and fans will be cheated if they are not able to see Buxton chase down balls in centerfield while hitting home runs out of the launching pad that is Coors Field. 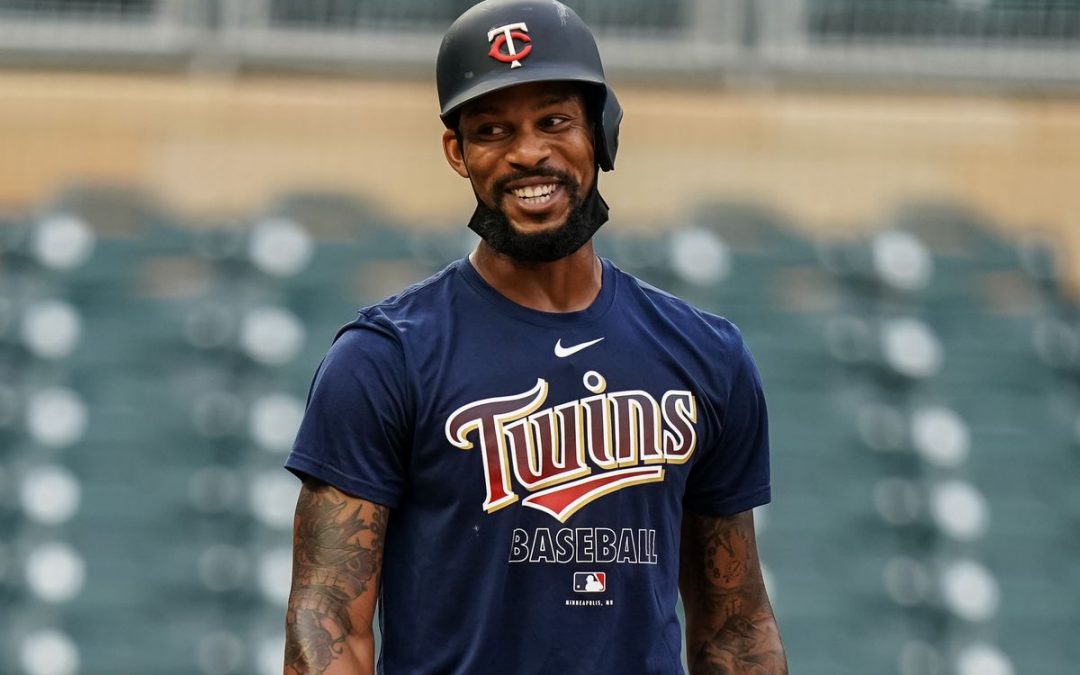 Minnesota Twins outfielder and MLB Bro Byron Buxton had a sensational start to the regular season and capped it with the American League Player of the Month award for April.

Buxton took his place among some of the all-time great outfielders in Twins history by earning the honor of best player in the opening month of the season.

MLBbro.com Assistant Managing Editor Mark Gray checks in on what may prove to be Buxton’s breakout month.

Byron Buxton’s scalding hot bat has no freeze. This video alone shows you how Buxton has the potential to completely wreck a game by turning singles into doubles and being versatile with his hitting approach, able to bash or make contact and utilize his blinding speed.

His Wednesday was something special as he went 5-for-5 and his Minnesota Twins squad, who have the fewest wins in MLB, thrashed Cleveland.

He’s proving to be the total package.

When MLBbro.com told you that the former No. 2 overall pick was looking like an MVP candidate and then referred to MLB Network’s Joel Sherman as the original source of such a proclamation, we got attacked by a couple of trolls who felt it was too early to anoint a guy with a lifetime batting average below .250, as the best player in the game this season.

Fast forward to the 25-game mark and it’s clear to everyone analyzing Buxton’s development that he’s not just on a hot streak. He’s matured as a player. The five-tool athlete with unlimited potential is finally ascending to official superstar status nine years after his Draft Day.

You just never know with baseball.

It’s gotten so legendary for Buxton that people are mentioning him in the same breath as Kirby Puckett, the great Hall of Famer and two-time World Series champion.

Until today, that seemed far-fetched. Buxton is probably close to Puckett’s equal with the glove, although he doesn’t have Kirby’s ups, but as a hitter, Kirby was head and shoulders better,

However, the maturation of Byron Buxton has become a movie, where blinking could cause you to miss the kid from Baxley, Ga. becoming a mature, patient assassin at the plate.

He started off hot with two nukes in his first two games and despite a brief injury setback, he hasn’t missed a beat.

Now, he’s the talk of every baseball show, podcast, social media post and video talking about the leading MVP candidates for this season

There are levels to this and Button just took it up another notch, 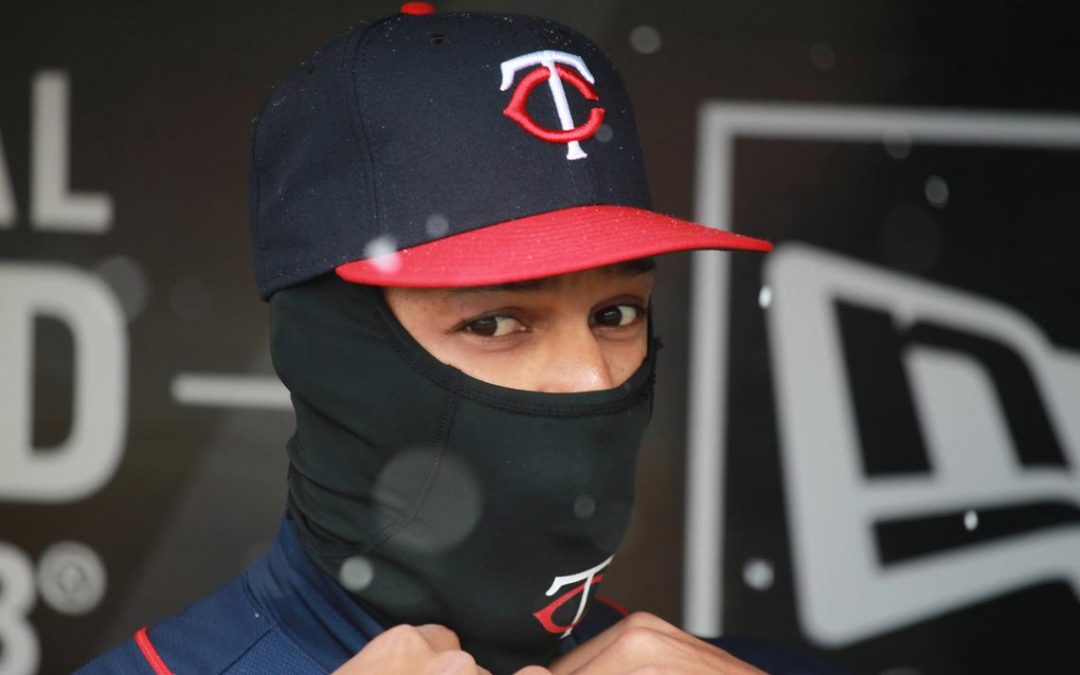 Byron Buxton has stamped his name as an early MVP candidate in 2021 and by doing so has shown he is one of the best players in Major League Baseball.

With the first few weeks of the season behind us, Buxton has flexed the multiplicity of skills that led to him being rated one of the top prospects in baseball since Appling County High School in Baxley, Georgia. Legendary baseball reporter Joel Sherman insisted that even if Buxton didn’t hit, his athleticism, premium defense and speed make him an impactful player.

Now entering his 7th major league season, the former 2012, No. 2 overall pick has shown an impressive display of hitting and power early this season. It’s all coming together.

His .469 Batting Average is good for 2nd in the major leagues. He has a hit in all 10 games he’s played in this season, including a pinch-hit game-tying home run against the Tigers and a two-hit performance while in a winter wonderland of snow  against the Red Sox.

He also leads the league in OPS which is your on-base and slugging percentage combined.

We have seen signs of potential superstardom from Buxton in the past.  He’s a human highlight film with the web, putting in serious work with spectacular catches at the wall. Don’t forget, he has a cannon that would make Dave Winfield applaud.  There’s nobody really messing with him from first to third.

Injuries have played a major part in Buxton not being able to reach his full potential.  Since 2015, he has suffered a list of injuries and missed extensive time,  including a 2015 thumb sprain in his rookie year, knee contusion and back spasms in 2016, a groin strain and migraine in 2017, migraines, a fractured toe and sprained wrist in 2018 as well as a concussion and labrum surgery in 2019.

So what changed for Buxton this season?  It seemed he figured out some things at the plate in the Covid-shortened 2020 season as he hit .254 with 27 RBI’s and 13 Home Runs and finished with a career-high in slugging percentage. The most home runs he’d ever hit in a full season was 16.

Buck refined his power swing in the off-season and added nearly 15 pounds of muscle by lifting weights multiple times every day. Buxton also made sure that the addition of weight would not take away from his elite speed as he also ran nightly with his high school track coach.

It is good for baseball that Buxton is finally busting out as the definition of a 5 tool player.  If he can stay healthy, the rest of the game will come.  The potential is limitless whether it be a 40 steals 40 home run season or a somewhat surprising MVP award.