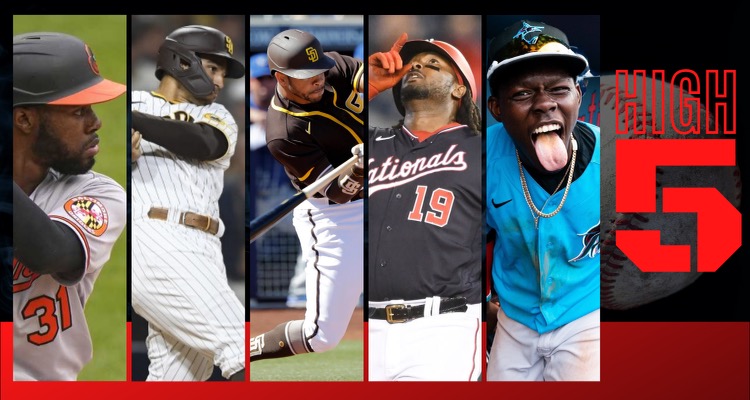 Cedric Mullins of the Baltimore Orioles has been one of the most underrated players in the Majors this season, but during Week 13, he finally got the recognition he deserved.

Mullins was named an All Star finalist for the American League outfield and celebrated by posting a .444 average over his last seven games with a three game sweep of the first place Houston Astros.

For his accomplishments, the Orioles outfielder takes the top spot on this week’s #HighFive list. 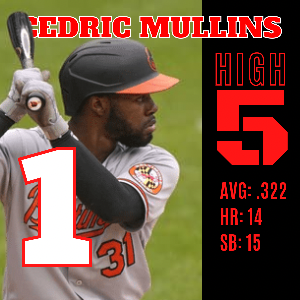 Cedric Mullins was one of six MLBbros to be named a finalist to start in the 2021 All Star game in Denver, Colorado.

No more than 6 Black American players have made an All-Star game since 2015, with a low of 4 in both ‘16 & ‘19. This season could be different as a new generation of stars is starting to find its way. Check out the MLBbro All-Star update from @DMGrubb on https://t.co/ndikOTIJyD pic.twitter.com/Ivv3JBiHxs

After having back-to-back games with two home runs during Week 12, Mullins showed off the speed faze of his game this week.

He stole three bases, scored five runs and hit three doubles on his way to a .444 batting average and a .667 slugging percentage.

Mullins led off Tuesday’s game with a home run on the second pitch of the game.

That night he was 4-for-5 with a home run, double, two RBI and a walk as his Orioles crushed the Astros 13-3 on their way to sweeping the three-game set.

Mullins is fourth in the league in total hits and eighth in batting average.  He travels to the sunshine state this weekend for a series against J-Up and the Los Angeles Angels.

For bringing Slam Diego to the city of Cincinnati, Trent Grisham takes the No.2 spot on this week’s #HighFive.

Wednesday night’s game only lasted six innings after it was cut short due to rain,  yet Grisham still managed to hit two home runs including a grand slam in the 5th inning to give his Padres a 7-5 lead.

Over the past week, Grisham is batting .391 with a crazy .870 slugging percentage.

He also hit three doubles in Sunday’s 5-4 win over the Arizona Diamondbacks.

Grisham has been an important piece in one of the most exciting lineups in baseball this season.

He is batting .281 with 10 home runs and 30 RBI.  This weekend he will look to bring Slam Diego to Philadelphia as he takes on Andrew McCuthen and the Phillies.

The other half of the MLB bro’s in San Diego takes the three spot on this week’s #HighFive.

He launched a home run in back-to-back games on Monday and Tuesday as he ended the week with three bangers.

His all-around game is exciting crowd-captivating.

Pham has batted in the leadoff spot in 34 games this season and has hit four home runs. That is tied for third in all of baseball.

.@TphamLV has been one of the best Leadoff hitters in all of baseball this season #MLBbros https://t.co/etaiXUaFX3

He will look to add on to his five-game hitting streak this weekend in Philadelphia. 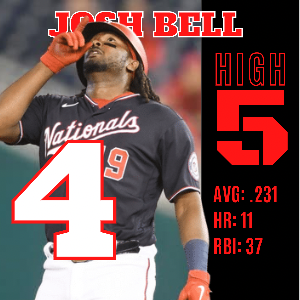 Josh Bell got off to a slow start during his first season in the Nation’s Capital, like a lot of his Nationals teammates did.

But he is starting to find his stride and it has shown at the plate in recent weeks.  Since June 16th he has 13 runs batted in and has hit three home runs, including a grand slam in a wild game last week against Philadelphia.

It came an inning after opposing MLBbro Andrew McCutchen hit a grand slam for the Phillies.

We think @JBell_19 saw our previous tweet ? dueling #MLBbros have grand slams in back to back innings! https://t.co/ybZfh03ntu

He begins a four game set Thursday against All Star hopeful Mookie Betts and the Los Angeles Dodgers. 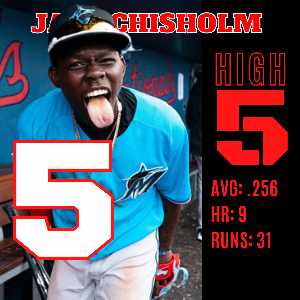 Sweet Jazz Music was blasting in the Miami air this weekend after he led off Saturday and Sunday’s games with leadoff triples.

He was named our Home Boi Highlight after going 5-for-12 with a .417 average, four RBI and one home run over the weekend against the Washington Nationals.

Chisholm has hits in six straight games and is batting .280 with four runs, four RBI and a double during that span.

Chisholm and the Marlins will travel to Hotlanta this weekend for a series against their National League East rival, the Braves.