Josh Bell Back In The Burgh With A Bang

After playing 552 games as a member of the Pirates, Josh Bell made his return to the Burgh over the weekend and highlighted it with a moonshot home run.

Thanks for giving Josh Bell such a warm welcome back, Pittsburgh.@JBell_19 // #NATITUDE pic.twitter.com/tXfHPyANYd

Josh Bell was back in the Steel City where his Major League career began back in 2016 and Bucco Nation made sure to show him plenty of love.

They greeted the Nationals first baseman with a standing ovation before his first PNC Park at bat as a member of the road team.

Yinz knew it was comin'…

Josh Bell launches a MASSIVE homer in his first game back in the Burgh.@JBell_19 // #NATITUDE pic.twitter.com/PmM6mVrgMC

Bell hit 86 home runs and drove in 309 runs during his five years with the Pirates, and in the sixth inning of Friday night’s game he proved his comfort in the Pittsburgh batters box by hitting a solo home run to extend Washington’s lead to 3-1.

However that lead would not stand up for long: Pirates MLBbro Anthony Alford answered Bell’s bomb with a homer of his own to cut the deficit to one, then later on in the game, their young phenom Ke’Bryan Hayes sent folks home happy with the first walk off hit of his career.

During the weekend series Bell was 3-for-9 with five walks, two runs and that home run as his Nationals could only salvage one win out of the three games.

Bell finished third in Rookie of the Year voting in 2017 and was named as an All-Star for the Pirates in 2019.  That year he hit .277 with career highs in home runs, average, OPS, slugging percentage, hits, doubles and runs.

Josh Bell has hit 25 HRs in a season for the 3rd time in his @MLB career.

That year was also Bell’s second time homering 25 or more times for the Pirates, and with him already passing that mark this season, he became just the second player in Major League history to hit 25 home runs for the Nationals/ Montreal Expos and the Pirates joining former first baseman Adam LaRoche.

Bell is one of the few pieces that stayed in Washington after their fire sale during the trade deadline.  His year started off slow as he only hit .113 for the month of April and has been fighting to rise the average ever since.

“I feel good as of late,” said Bell to reporters before Friday night’s game.  “I had a really rough start that I had to work my way out of.  Thank God it wasn’t a 60-game season again.  I kind of turned things around.”

He has definitely earned himself  a payday after this season whether he gets it in D.C. or with a new franchise.

Bell is now chasing the 30-homer mark during this final month of the season.  Showing those numbers during contract negotiations can only help his cause.

This week he and his Nationals will take on the “Bahamian Blur” Jazz Chisholm Jr. and the Miami Marlins. 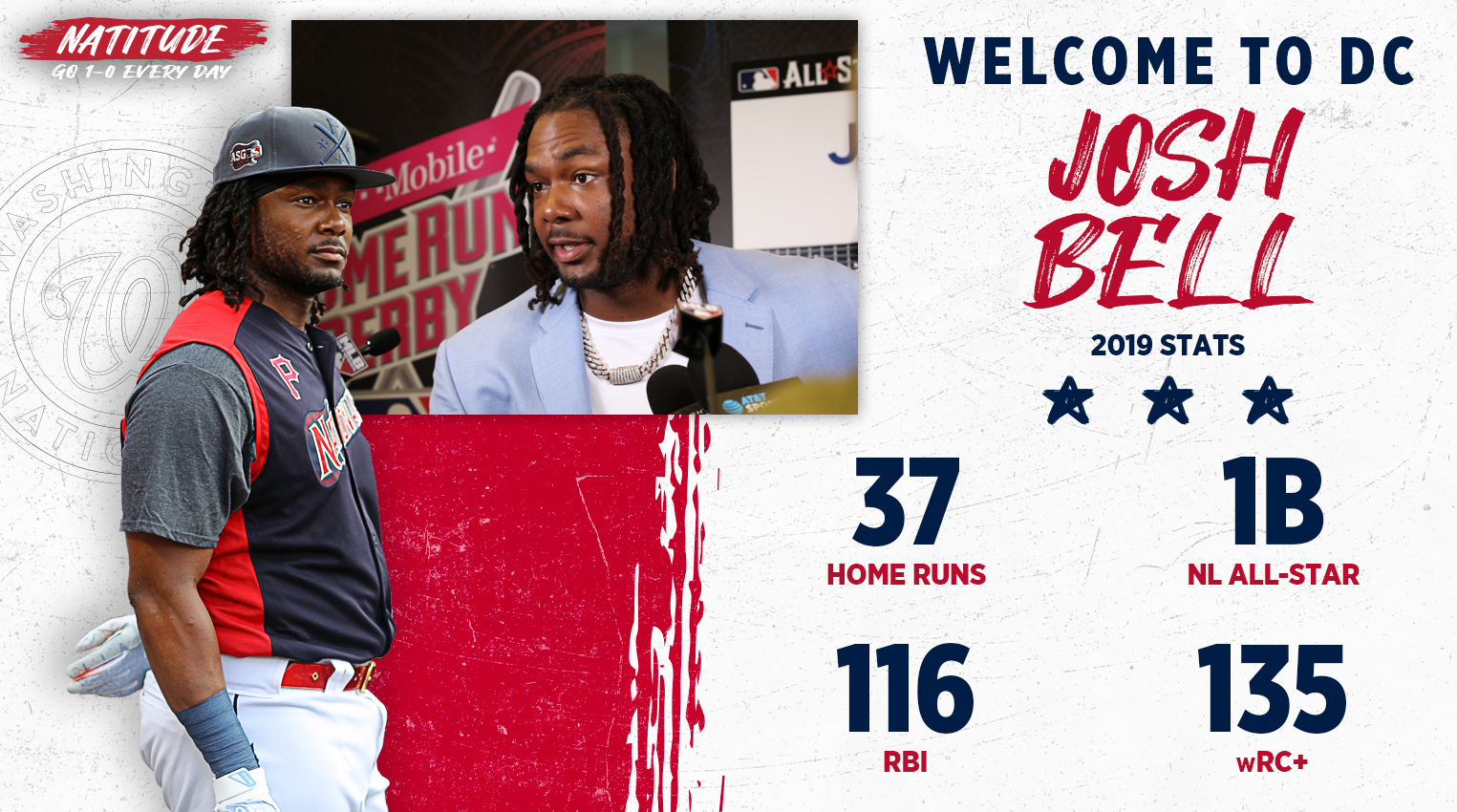 It was no Joshing in Da Bronx Friday night.

Bell, the big swinging first baseman Josh Bell got things started for the Nats with a solo blast in the top of the second inning. The 423-foot shot was almost the newest addition to the famed monument park in center field.

In the eighth, it was Josh Harrison.

With two on, he yoked a fastball over the left field wall that took a one-run lead and grew it to four, as part of a six-run outburst that put the game out of reach.

Harrison walked and scored again in the ninth, finishing the game with a team-high .325 batting average.

The follow through was beautiful. You can’t blame Josh for admiring that work of art.

Even better was the look on the face of Jonathan Loaisiga. He just had to wait for it to land.

Loaisiga must have been confused. He had given up three runs all season, and Harrison gets three of them in one stroke.

More of this baseball. The vibe. The audacity. The unapologetic flex of it all.

Yes, the Yankees had been the story as of late, but Giancarlo Stanton’s hitting streak ended at 12 games, and New York has lost two in a row.

Out of the spotlight, the Nationals have begun to warm up and both Bell and Harrison have been right in the middle of it all.

Bell has been one of the National Leagues’ top power hitters since bursting onto the scene in 2017 with 26 home runs for the Pittsburgh Pirates, and he’s starting to feel more welcome in the nation’s capital.

As the first month of this season came to a close, Bell refound the pop in his bat. Over his last seven games, he’s racked up three extra-base hits, with two of those becoming souvenirs.

Another former Pirate, Harrison is on pace for a career year hitting in the two-hole for Washington. He’s gone without picking up a hit only five times in 2021. Harrison has already matched his 2020 home run output and topped his season totals in hits, runs, and walks.

The Nationals are only two games back of the Philadelphia Phillies. They still have a lot of the elements to contend for the playoffs. With Harrison helping to set the table, Bell is going to have plenty of opportunities to eat.