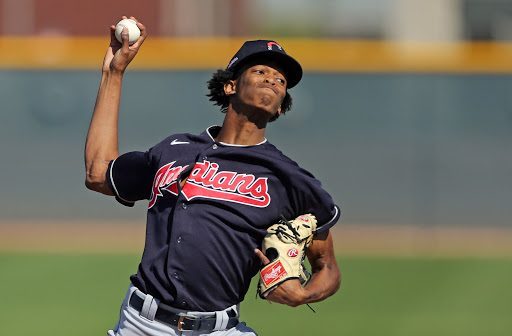 “Dr. Sticks” Is What They Call Triston McKenzie In The Cleveland Guardians Clubhouse

Triston McKenzie is 6-foot-5 and listed at 165 pounds. The body-frame of McKenzie will only develop over time and improve but the Guardians brass isn’t worried. When asked about his size and if that would matter, McKenzie responded:

“I don’t know how I stay so slender. I feel like I eat a decent amount. I think it’s just how my body works……I believe baseball is very taxing. I feel like I burn through a lot of what I eat. I’d say throwing the way I do is me learning my body and learning what makes me feel good and being consistent day in and day out.”

McKenzie’s had somemore gems since that near no-hitter in 2021. Dr. Sticks (1-2) threw 6⅓ scoreless innings in his last game against the Oakland A’s.

McKenzie, held the A’s to three hits, struck out seven and walked one as Cleveland swept a series at the Oakland Coliseum for the first time since April 10-12, 2000.

McKenzie spoke to the media after the A’s game and said, “For me to be successful, a lot of it is mixing my pitches up and keeping guys guessing. We stuck to the game plan really well today.” Short and simple for the laid-back Guardians ace. “Coming up here in 2020 when stuff was a little weird (because of COVID) and evolving through last year, coming into this year, I feel a lot more comfortable,” McKenzie said. “I feel the team aspect has grown on me. I know a lot of the guys really well now.”

After a rookie season where he said he didn’t feel comfortable asking certain questions around the veterans in the clubhouse, McKenzie is happy with his teammates and their bond as it continues to get better.

“Really powerful stuff, really violent,” Cleveland catcher Maile said about McKenzie’s outing. “To call pitches for a guy like that is awfully fun because even when he’s got something else in mind, you really can’t go wrong when he executes well.”

McKenzie did not allow an Oakland runner to reach second base until Chad Pinder’s one-out single put two aboard in the seventh, which is particularly impressive.

Guardians skipper Terry Francona spoke about McKenzie, saying, “He didn’t give up much. There were times where he lost the strike zone, but he reeled it back in in a hurry, as opposed to 3-4 hitters.”

McKenzie’s next start will be against the Toronto Blue Jays who have lost three of their last five games.

The MLBbro pitching phenom has an impressive resume so far in 2022, including a 2.70 ERA, 1.03 WHIP, and 24 strikeouts over 23 1/3 innings of work. He will face the Blue Jays next time out. This will be a tough task as the Blue Jays have a stacked batting lineup that includes our very own MLBbro, George Springer. 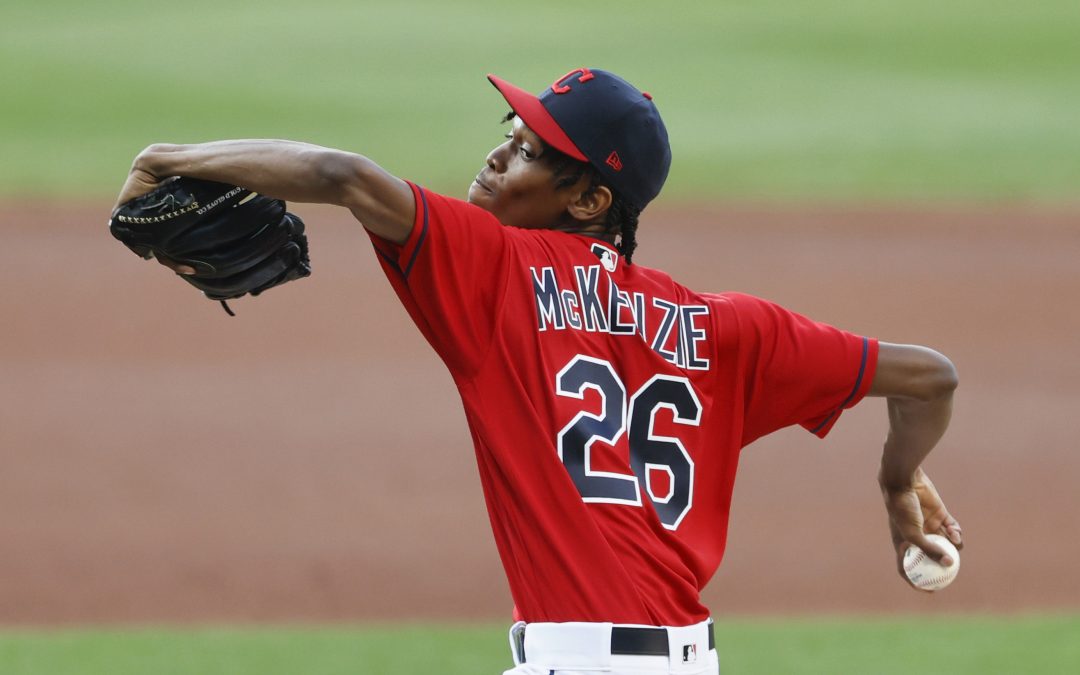 Triston McKenzie Was Giving Off Those Ohtani Vibes

Triston McKenzie came into the Red’s house, left the lights on, and didn’t bother cleaning up the dishes as he struck out 7 and recorded his first career hit in his start Saturday afternoon.

The Indians former top prospect got his second start of the year and was a nightmare for Reds hitters.  He finished with 7 strikeouts and only gave up 1 run through 5 innings in his team’s Saturday matinee against the Cincinnati Reds.  The only run he gave up came on a third-inning solo home run.

McKenzie would go on to overshadow that lonely blemish as he upped his strikeout total for the 3rd straight appearance. He has accounted for at least 5 strikeouts in every game.

Six of McKenzie’s strikeouts came in the first 3 innings of the game; his biggest one coming with two outs and two runners on to escape a third-inning jam.

“Dr. Sticks’ ‘ as he was referred to by the Indians broadcast team surgically worked with his bat as well, on the way to recording the first hit of his major league career, singling to Right Field in the 4th inning off Sonny Gray.

It has been a solid start to the 2021 season for McKenzie, coming off a successful rookie season in 2020.  He finished last year with a 2-1 record posting an impressive 3.24 ERA and striking out 42 batters in 8 games.

This season we have seen the Indians struggle as a team at the plate, putting more pressure on McKenzie to grow up fast and become a shutdown starter… a slump buster…  especially with the team losing former Cy Young winner Trevor Bauer,

This week was a special one for the rest of the league and McKenzie as we celebrated Jackie Robinson Day.  Although McKenzie was not on the mound, his impact was still felt as he along with more than 200 members of the Player Alliance donated their game day salaries to the Jackie Robinson Scholarship Foundations.

Early on it’s looking like McKenzie is poised to power through a sophomore slump and be a major part of the Cleveland rotation.