If the season was only seven weeks long, Aaron Judge would be the American League’s Most Valuable Player.  He rolled the dice and if things continue to go his way, he will be baseball’s highest-paid player by season’s end.

For the second time this season, he takes the top spot on our #HighFive List.

Aaron Judge has his Yankees off to their best start since 1998 when they went on to win 114 games and swept the San Diego Padres in the World Series.

Judge, whose 14 home runs lead the Majors, takes the top spot on our #HighFive list once again and deservedly so.  He is leading baseball’s best team in average, on-base percentage, runs, hits and OPS while only trailing fellow MLBbro and #HighFive member Giancarlo Stanton for the team lead in RBI.

“It’s fun with this team,” Judge told reporters after his 4-for-5 with two home run performance on Tuesday.  “We want to play two games a night if we could.”

That was Judge’s third career four-hit game. He now has his average sitting at .306 with 30 runs batted in and an OPS of 1.049 to go along with those 14 homers.

Our captain @RobParkerFS1 joined Episode #7 of the High & Outside Podcast to give his take on why Aaron Judge and Giancarlo Stanton are the best one-two punch in baseball. Check out the full episode on both YouTube and SoundCloud. https://t.co/3Exj7tlY2lhttps://t.co/YptaSexfN1 pic.twitter.com/EfN2JRMABg

His Yankees will welcome Tim Anderson and the White Sox into the Bronx for a three-game series this weekend. 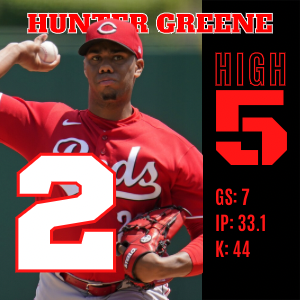 I have seen plenty of heartbreaking moments in baseball over my twenty plus years on Earth, but there are not many I can think of other than the look on Greene’s face after his team allowed no hits and still found a way to take the loss Sunday against Pittsburgh.

No pitcher in the Majors has thrown more pitches in a game than Greene’s 118 on Sunday. If it had not been for a few untimely walks, he may have had a chance to throw a few more.

He struck out a career-high nine batters in the game, but also gave up a career-high five free passes to Pirate hitters, including two in the 8th that led to him being taken out just five outs away from history.

“It would have been great to have a different result,” said Greene in this postgame interview.  “But it is what it is.  This is my team, ride or die with them.”

The Reds are in rebuild mode this season, but one positive I can take away from Greene’s outing was the fact that manager David Bell actually gave him a chance to build strength and confidence for starts farther down the line in his career. Typically, we see young pitchers held back and catered too when they first enter the league, but Greene was ramping up for the day he officially becomes an ace.

On the season, Greene now has a 1-6 record with 44 strikeouts and a 6.21 ERA. His next start will be Saturday in Toronto where he will take on the Blue Jays. 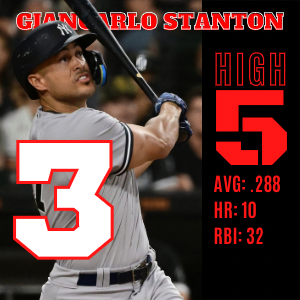 No visiting player had hit a home run over the new left-field wall in Baltimore’s Camden Yards. That was until Stanton stepped into the box and launched one in the 4th inning of Thursday’s game.

People have been waiting for Stanton to fall off from his hot streak that began last season and has carried into 2022.

He, along with Judge, are Major League Baseball’s current leaders in average exit velocity and both are in the top 6 when it comes to hard-hit percentage.

A little over a week ago, Stanton had a stretch where he homered five times in five games.  Through his last seven games, Stanton is 12-for-26 with a .462 (emphasis on the .462!) batting average with 13 RBI, a 1.000 slugging percentage, four home runs, a .548 on base percentage all while drawing five walks in the process. 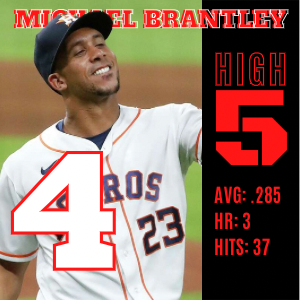 Michael Brantley has set the tone for the Astros’ lineup during their current hot streak as he leads the team in batting average and on base percentage this season.

Brantley is batting .321 over his last seven games with five RBI, a .504 on base percentage and one home run, which came during Houston’s Monday night massacre of the Boston Red Sox.

His three-run home run was one of five dingers the Astros hit in an inning, making them just the eighth team in Major League history to accomplish the feat.

This weekend, Brantley’s Astros return to H-Town for the Silver Boot Series against Marcus Semien and the Texas Rangers.  If all goes according to the plan, the lefty will matchup against Taylor Hearn Sunday afternoon. 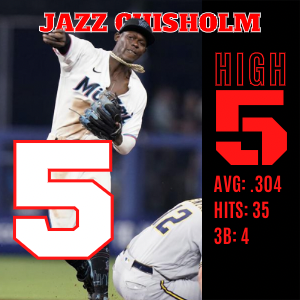 Euro-stepper Jazz Chisholm Jr. is doing everything humanly possible to be the face that represents the Marlins franchise.

Swag, charisma, skill – the “Bahamian Blur” has brought it all to Loan Depot Park, and now he is putting up the numbers at the plate to make his case.

#MLBbro The Bahamian Blur is a one man wrecking crew in Miami https://t.co/pxtOk90pyM

Those are “main event” type numbers that we rarely see a player put up for his team, but we have known since last season Chislohm is different. If he stays on this wave, he has a chance at taking the crown for best second baseman in baseball.

Over his last seven games, Chisholm is batting .286 with two home runs and four RBI. This weekend, he’ll have a chance to take on the reigning World Series champion Atlanta Braves.

MLBbro reporter Dante Miles catches up with MLBbro SS/2B Jazz Chisolm at Truist Park In Atlanta for a revealing one-on-one. 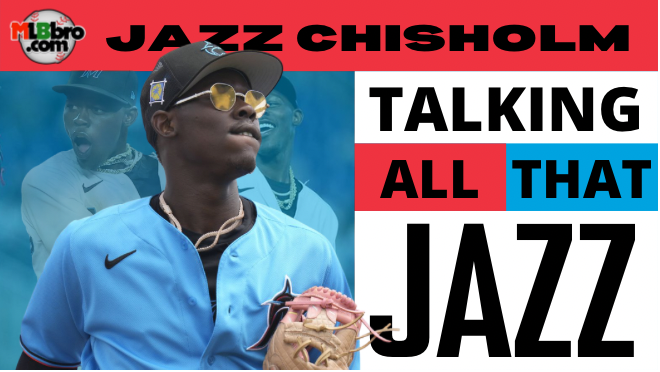 Bring Out The Trumpets |It’s Time For Jazz Chisholm AKA “Bahamian Blur” To Take Over As Franchise Player Of The Miami Marlins?

In any level of sports, a team needs a big-time name for their fanbase to identify with. In Major League baseball, no team has struggled with its identity more than the Miami Marlins. Even with two World Series championships, the franchise has consistently been at the bottom of the league in attendance and to take it even further, relevance.

Right now, there is no “Face of the Marlins” for fans to get excited about. Over the years, the team’s homegrown talent has not resonated with fans and the ownership group has shied away from signing expensive big-name free agents. The only names that commanded attention the last few seasons were in the front office with Derek Jeter, who recently left as CEO, and general manager Kim Ng, who made history as baseball’s highest-ranking female executive and first woman general manager in the four major professional sports leagues.

These are admirable choices, but not enough to fire up a fanbase…until now. His name? Jazz Chisholm Jr., the charismatic and highly skilled baller also known as “The Bahamian Blur.”

Early this season, Chisholm Jr. has started on fire offensively ranking among team leaders in hits, runs, triples and home runs while leading the team in RBI. But it’s his following that has his popularity surging to levels not seen since the late Jose Fernandez, who was the Marlins’ last real superstar. No Marlins player has transcended their on-field exploits to social media or the collective industry like Jazz has.

Recently, Jazz added the video game industry to his resume. The developers of the MLB The Show 22 not only selected Chisholm as their Faces of the Franchises Marlins card but recreated his patented Euro step home run celebration as well.

Jazz Chisholm euro step is in The Show 🔥 pic.twitter.com/4oSjrlm89k

it will be interesting to see if baseball’s biggest social media MLBbro expands his on-field production as fast as his online popularity. Teammate and clubhouse leader, Miguel Rojas has been working out and counseling Chisholm via Fox Sports to just be himself.

“He’s already a fan favorite. Young fans, old fans, people who’ve been around baseball, they like the way he plays and everything that he brings to the table,” Rojas said. “What I say to Jazz, though, is that now is your time to focus on your game. Your game will speak for you. The things that you do on the field and off the field, you don’t have to do too much. A lot of people already like you.”

What’s Poppin’ heads down to South Florida for a bro who has been red hot at the plate.

Jazz Chisholm Jr. is on a tear right now; looking to lead the Marlins to another series win over the Cardinals. 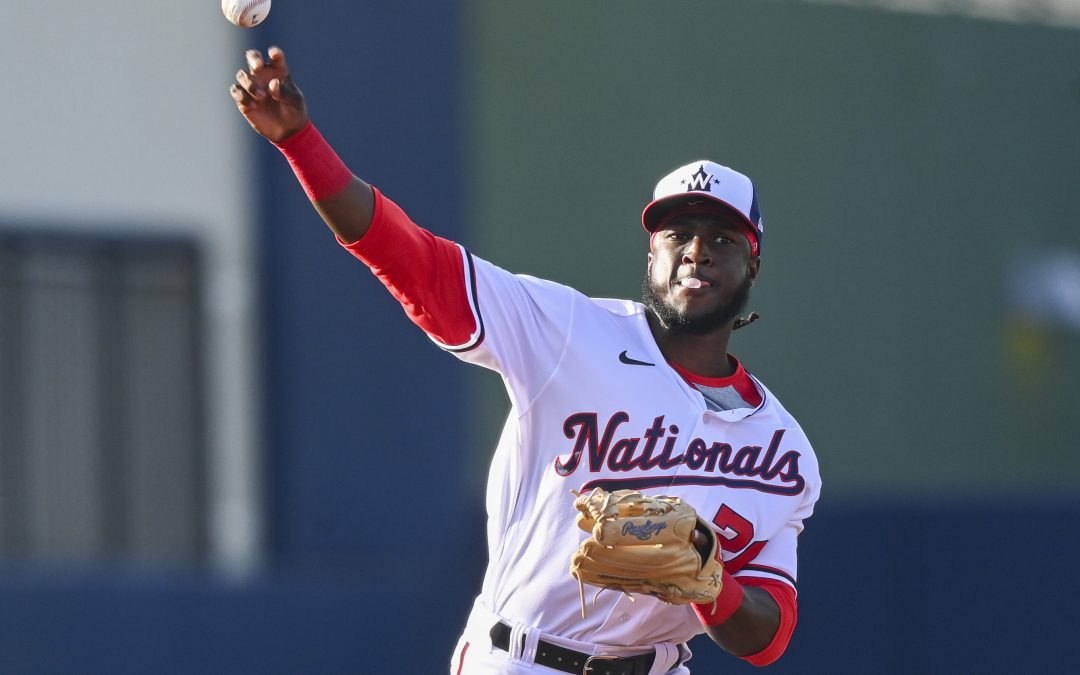 Lucius “The Swiper” Fox Is An Island Boy Just Trying To Make It In Major League Baseball | So Far, So Gucci

Lucius “The Swiper” Fox became the ninth Bahamian-born player to reach the Majors after making his debut last weekend. The Island Boy is ready to bring a little flair to the DMV.

On Sunday, Lucius Fox joined Miami Marlins second baseman Jazz “The Bahamian Blur” Chisholm Jr. as the only two current Bahamian-born players in the Majors. No, not the fictional character appearing in American comic books published by DC Comics, commonly in association with the superhero Batman. This Lucius Fox is another MLBbro who plays the game with electricity and swag.

Last season we were introduced to the sweet “jazz music” and home plate eurosteps Chisholm brought to South Beach. If Sunday is any preview of what’s to come, the people in the nation’s capital will be receiving a nightly treat seeing “The Swiper” steal the show.

Fox’s Sunday Funday got started early. He introduced himself to Nationals fans with a webgem during the second inning when he dove to his left and fired a one-hop throw from his knees to rob Pete Alonso of a hit.

Went to the Mets-Nats game today. My team didn’t win, but the game was decided by which team took best advantage of bunt tactics. The crowd reaction in BOTH cases was notable. You cannot tell me small ball doesn’t have a roll in the MLB game https://t.co/kMSH4fG3Aw

Later in the game, Fox collected his first Major League RBI in pure, old school MLBbro fashion by successfully executing a suicide squeeze to tie the game in the 8th inning, scoring former Gold Glove winner and two-time All-Star Dee Strange Gordon, putting everyone in the Nats dugout in a dancing mood.

The Nationals would win 4-2.  After his showing Sunday, Fox is making a case to be the team’s permanent shortstop for 2022.

Fox’s road to the Majors has been a long one.  Born in Nassau, Bahamas, he moved to the United States at the age of 12 for school for two years before moving back to the Bahamas – in order to be considered an international free agent in 2015.  He got a $6 million signing bonus from the San Francisco Giants, where he began his minor league career.

Fox has bounced around the Majors. He’s spent time in the Giants, Rays, Royals, and Orioles organizations before being claimed off waivers by the Nationals in November of 2021.

Fox did have a quick cup of coffee with the Royals – although I’m not sure he even had a chance to add any creamer.  He was sent back down to the Minors the next day after not getting a chance to enter the game. In five Minor League seasons, Fox has a batting average of .244 with 16 home runs, 18 triples and 142 stolen bases.  He’s had four seasons with at least 25 stolen bases – two of those reaching 30 – with a career high 39 steals in 2019.

Fox is part of a Nationals roster that has a few MLBbros serving as key contributors.  In addition to Strange-Gordon, first baseman Josh Bell hit 27 home runs last year and former Dodgers top pitching prospect Josiah Gray, acquired by the team last year via trade, is looking to become the team’s Ace.