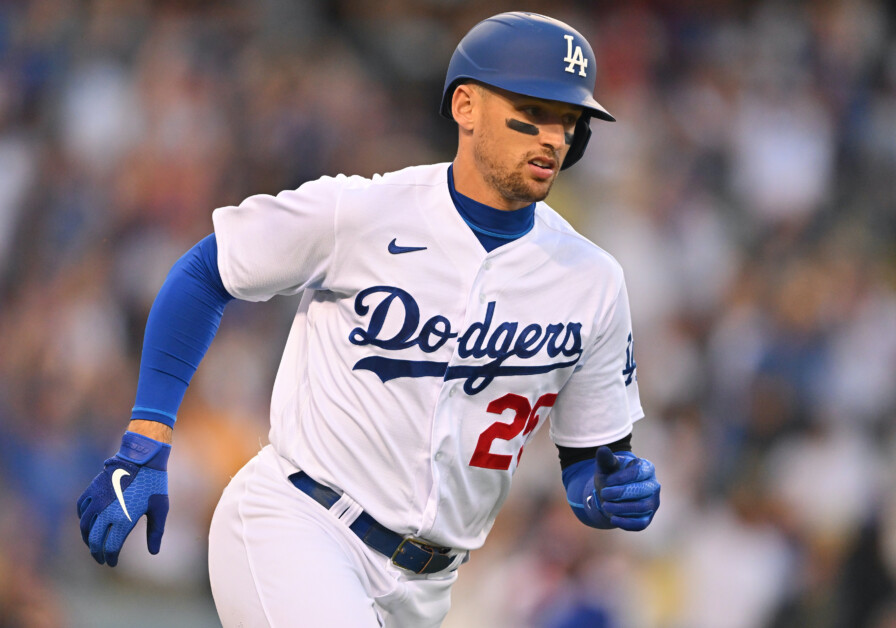 The Los Angeles Dodgers are on an epic run to distance themselves from their divisional rivals, the San Diego Padres. Remember about six weeks ago when the Padres had whittled the Dodgers’ NL West lead down to 1.5 games?

Well, the alarm clock sounded, and Los Angeles went on a winning streak that produced 19 wins in 21 contests. Not only have the Dodgers extended their division lead to 11.5 games, but they have pulled within percentage points from having the best record in baseball behind the New York Yankees.

But while All-Star, Mookie Betts deservedly commands the headlines in Dodger Nation…

It is well known in sports that midseason moves that stay under the radar can be the final piece to a championship team. MLBbro.com is starting to believe that Trayce Thompson is that piece if the Dodgers make it to the World Series in late September to early October.

Let’s check the scenario of the Los Angeles Dodgers prior to June 20 when Thompson arrived. The Dodgers were below .500 in a 17-game stretch with a 7-10 record that included losses to the Pittsburgh Pirates, the Cleveland Guardians and a painful sweep by the San Francisco Giants.

What made things worse, Mookie Betts was injured, and AJ Pollock was let go. When the Dodgers acquired our MLBbro from the Detroit Tigers for cash considerations, it was strictly a stopgap move to add outfield depth and considering his brother Klay had just won the NBA championship recently, a little PR marketing wouldn’t hurt either.

Trayce Thompson with the double and brother @KlayThompson loves it! ❤️ pic.twitter.com/r1dXZ9JG3Z

But Trayce Thompson has become more than just a fill-in for Mookie Betts or a cheap marketing stunt. Our MLBbro has become a factor that is not only a positive on the field but in the front office where checks are being written for this championship run.

To start, Thompson’s play has been so impressive that the franchise has options to protect their franchise player by allowing him time in the infield to protect his ribs if needed.

MLBbro Mookie Betts Shines In His Return…But Is A Position Change In The Works?

Starting with the 25 games that Thompson has played, he has shown he is the two-way player who can be on the postseason roster in a few months. His 0.5 oWAR, 0.3 dWAR, 115 wRC+ with four defensive runs saved shows that he can make plays that can affect games much like his superstar teammates.

Trayce Thompson goes into the stands for a wild grab! pic.twitter.com/jMvp2dFrgE

His batting slashes of .284/.360/.493 with two homers and 13 RBI is exactly what the Dodgers are looking for with role players giving out maximum production that can be sustained at opportune times.

This production could change how much the Dodgers are willing to spend as we approach the trade deadline on August 2. With Juan Soto on the trading block after turning down a 15-year $440 million offer from the Washington Nationals, the Dodgers are one of the few franchises with the resources to acquire him.

But is it worth it to spend the type of money to get Soto and deplete the young talent coming in the future while Thompson is doing exactly what the franchise needs, and dominating baseball the past month, for a fraction of the price? Now the Dodgers have the option to get a less expensive left-handed hitter who feasts on left-handed pitching and can platoon with Thompson for the rest of the season into the playoffs.

While Trayce’s star is rising, humility has not left his DNA as he credits his coaches for his success via Dodgerblue.com.

“I know I was in Triple-A most of the year, or for a good chunk of the season, but I feel I’ve been in a good spot,” Thompson said… “And honestly, I feel like I have been searching a little bit here. But I feel like my at-bats have been a little consistent, but they can definitely get better.”

Trayce Thompson. That is all. pic.twitter.com/8RrUhLoQEW

“These guys have been awesome working with me. All three hitting coaches, and even a lot of other coaches just talking, just having conversations and obviously all these guys in the locker room. But in my opinion, it can get a lot better. I kind of strive for that every day.”

Our MLBbro and the Los Angeles Dodgers will see how long this relationship lasts particularly on August 3, the day after the trade deadline.